anguage geography studies the spatiality of language. The examination of the Hungarian (geographic) place and personal names, tribe names as well as the family names, looks back about one and a half centuries. However, today’s name geography has only emerged through digital databases and computer-aided cartography. Geographers, however, have generally not been very concerned with the spatial nature of linguistic phenomena. The following is an attempt to address this gap in the scholarship by focusing on the example of the Gábor family name and its name variants in geographic and historical contexts. Amongst Hungarian family names which have been inherited from the 15th and 16th centuries, Gábor is very common, and the oldest use of which was derived from the father’s personal name. Such is the surname of Gábor, whose

spatial distribution and temporal changes are presented in the study, with special attention to historical and political influences. The research was based on three databases: the first census of the country after it was completely liberated from Ottoman rule for the purpose of recording the taxpayer (1720); the Internet database of the First World War Loss List (RadixIndex), and data from Hungarian, Slovak, and Austrian web telephone books (no data from Romania and Serbia). 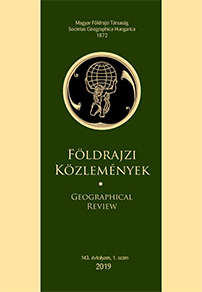